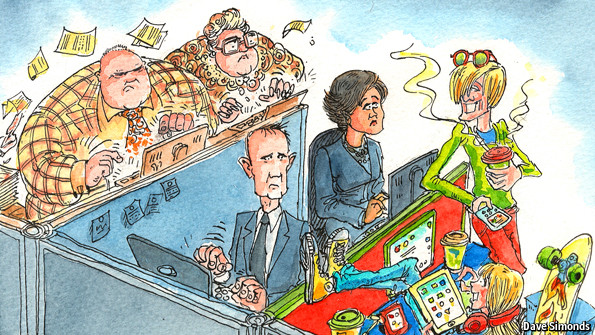 There is nothing new about different generations working side by side.  The younger ‘apprentice’ learns by following the older worker.  What is different nowadays is that younger workers have new key skills which are in demand from employers – social media, marketing, research, knowledge management, technology, programming etc.  These workers have developed these skills socially before they even reach the workplace.  As a result, traditional career progression models no longer apply.

As recent article by the Economist illustrates, there are two key elements to the generation diversity drama. Firstly, the skill set of a particular generation being in demand and the effect this has on other workers.  And secondly, the sustainability issues for organisations that have a workforce skewed towards one particular generation.

Many older workers can feel threatened by ‘digital natives’ (those born after the founding of the internet) who can achieve rapid promotion for their new technological knowhow.  For the first time, those running organisations can find themselves lacking the technical knowhow that is essential to their organisation’s success.

During the 90s and 00s, flatter organisational structures broke down traditional career ladders and the idea of steady promotion for many workers.  As a result, people were increasingly judged on their relative value to an organisation. There became more of an open market for skills.  Where particular skills of a generation such as Gen Y were key to the organisation’s success, they became more in demand.

The 00s saw the rise of ’employer branding strategies’ which followed employers’ desire to attract Gen Y. This generation became the most researched, written about and commented about of any group of workers. We know about their desire to be leaders, their demands, unrealistic expectations of their worth and their blurring of work/social boundaries. Some employers focused on being attractive to a generation of workers with new skills. Google office’s social facilities, onsite laundrette etc. were a magnet to these young workers.  Entire workforces started to emerge as just one homogenous age group.

However, this focus on Gen Y meant that other generations feel neglected, resentful and somehow pushed aside by their employer. Yet, is this view really justified?

There are real challenges for businesses that have a workforce age profile skewed towards one particular generation.  Google have famously struggled to shift their HR policies that were designed with 20 somethings in mind to become more family friendly for their longer serving workers who started to move into a new 30 something life stage.

In another sector, a very different problem was emerging.  In Local and Central Government, long service by Baby Boomers who were promoted through a traditional structure has resulted in a low turnover and few opportunities for younger workers.  The closure of final salary pension schemes to new workers, reduced the attractiveness of these to new recruits.  As a result, these workplaces often have an average age around 45-50 years old with less than 10% of people under 30 years old.  As Baby Boomers reach retirement, these organisations are facing problems with succession planning, and wellbeing where Baby Boomers are choosing to continue working.

Talent Glue are planning to conduct our latest round of research into the impact of generational diversity of the UK workforce.  Our research has tracked changes in attitudes over the last seven years and will see whether there has been an impact on workers following the economic downturn of the late 00s.